“And I think it’s gonna be a long, long time
‘Til touchdown brings me ’round again to find
I’m not the man they think I am at home” – Rocket Man by Elton John

A misconception exists in Einstein’s famous equations – that there’s some absolute speed limit where we couldn’t possibly travel to the stars any faster than light speed.  It’s actually false. Well, to everyone we knew out on Earth, they’ll be long gone by the time we come back to regale them with our tales.  But to us and our crew on the SS Enterprise, well we could explore half the galaxy in one lifetime, with the right warp drive (which is entirely another issue).

First, the Twins Paradox – and the hidden paradox within.  The focus of the twins paradox is how one twin flying to a distant star and back will barely age, while their counterpart back here on Earth has aged several decades.

Okay, do you see what I’m talking about yet?  Here’s another hint.  Do you think they were hanging out on their spaceship all those years enjoying some fountain of youth?  No – they literally took that amount of time to travel back and forth.  While years and years passed on Earth, only a few days or months passed on the spaceship.

And that, to me, is the far more interesting paradox.  Let’s take our favorite star, Alpha Centauri, hanging out four light years away.  I’ll leave my brother off at home, and take off on my high speed rocket at near the speed of light, so it takes nine earth years to go there and back.  But my brother and I, being rather perceptive people, don’t just notice that he aged and I didn’t.  When we compare clocks, literally only a year passed for me, while nine years passed for my brother.

Wait.  How can that happen?  How could I have travelled to Alpha Centauri and back, something light would do in nine years, in only a year?  Did I mysteriously break the speed of light?  And if so, how did I do that?

Well, yes and no.  What the absolute speed of light says is that no object can reach the speed of light relative to another object.  That’s why it appears to my brother to take me this long.

But what happens to me?  The answer is another twin – time dilation’s lesser known twin, space dilation.  As my ship accelerates past Earth into sublight speed, it’s not just time that shrinks to nothing, space also shrinks to nothing.  The distance I have to travel to get to Alpha Centauri now shrinks from four light years to only half a light year.

The Lorentz transformation – how spacetime dilates with relative velocity.

And yes, the shrinkage is exactly the same.  It’s called the Lorentz transformation and is why Einstein called it spacetime and not just time or space.  Both time and space dilate equally according to gamma.  This is what allows a photon (ray of light) to appear to travel the same speed relative to everyone looking at it.

Here’s another fun way of looking at it.  As we said above, accelerating a spaceship to that speed is well out of our technology, and that’s the real issue of space travel.  But we regularly accelerate particles to quite near light speed in our accelerators.  So let’s pretend this particle is a spaceship and see how long it would take for it to get to, say, the center of our galaxy (25k light years away).

Fortunately my favorite website has a great example – just as it throws up its hands in at the implication that we’re permanently Earthbound. 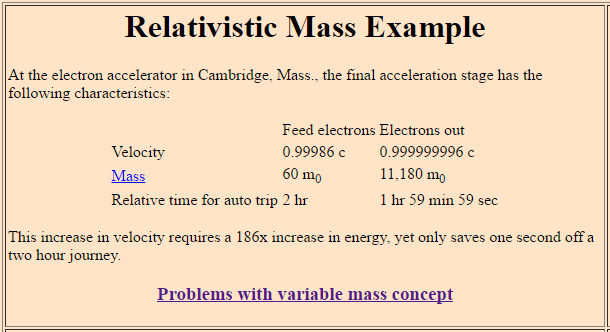 The fun part is, right below it they talk about the problems with variable mass – implying problems in general.

Saves just a second for you landlubbing Earth dwellers, maybe.  But let’s see how the world looks from the perspective of that electron.  By the Lorentz transformation, space and time dilate by a factor of about 60 for the first electron, and about 11,000 for the second one.  A good way to understand gamma is you’re going gamma times the distance in one gammath (1/gamma) the time.

Translation?  Particle 1 could get to the center of the Milky Way galaxy in about seven years.  Particle 2 could get there in a little under two weeks.

Of course we’ll never see the news of either of these guys travels.  We would have to wait here at rest for 50,000 years for them to return.  Entire civilizations, entire species will have come and gone by then.  But that’s not for rocketmen to ponder.

When you think about it, fiction portrays it rather accurately. The stars imploding on the ship are a good portrayal of how space would dilate.