I mailed Barack Obama the remnants of a clock I built with an Arduino, some electronic components and a USB battery.  Here’s the accompanying letter:

Enclosed please find the remnants of a clock I built.  Your meeting with Ahmed Clockboy inspired me to create this and show it off Halloween 2015.  If you check my Instagram, you’ll see videos and pictures of the working model.  I’m really proud of what I built, and I figured I should give you a tutorial about what to look for, to distinguish between an honest science project and a bomb hoax.

First, notice the breadboard, with wires and resistors attached.  Also notice the component seven-segment LED display.  This has pins which fit into a breadboard.  Contrast this with Clockboy’s clock, which was just a gutted consumer model.  No breadboard, all premade circuitboards and wiring bundle, prefabricated display. 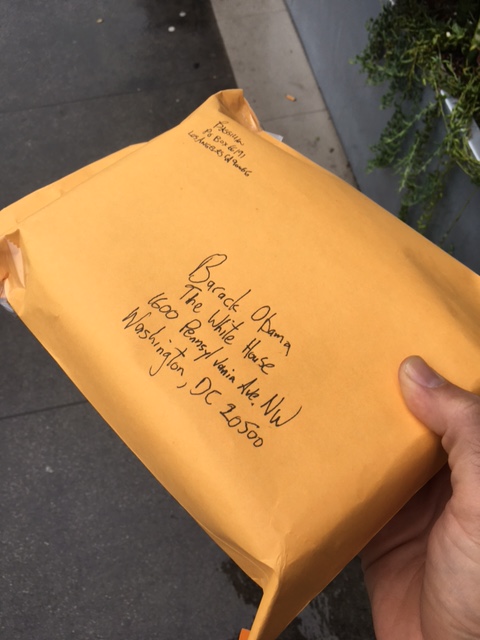 Also, notice the Arduino.  Any electronics science project would have a processing core like an Arduino or a Raspberry Pi.  You can then download a programming package to it, wire it up to electronic components like the LED, and watch the magic.  All put together, it was a self-contained, self-powered clock.  It taught me a lot about how to program an Arduino.

I say this because your meeting Ahmed and defending him over what was an obvious political stunt with no scientific merit really left me scratching my head.  Nobody who has any kind of technical background saw any scientific or educational value in what he did.  They all saw through the fraud.

I was so embarrassed by your lack of insight, I even wrote a presidential apology for you, which I’ve included.  So I wondered, I, a lifelong Democrat who voted for you twice, why you?  Why did you believe it?  And then it dawned on me.  Like attracts like.

Yes, Barack, I see it now.  You too are a fraud.  Just like this Clockboy.  And now everything makes sense.  Every statistic you quoted about restoring jobs, getting rid of terrorism, making the world safer, it’s all lies.  The more I dug down into the statistics you quoted, the more I found Potemkin Villages of data.  Every facial expression, every cause you support, every attack you make, all calculated frauds.

So in a way, maybe this Clock really is a bomb.  It is the bomb that blew up everything people believed in you, your entire legacy.  Leaving you, and the Democratic party I’m leaving, nothing but a hulking wreckage of a fraud.

Don’t let the door hit you on your way out.